It was the revelation of the millennium: witches, werewolves, vampires, and other supernaturals are real. Fast forward thirteen years: TV reporter Delilah Street used to cover the small-town bogeyman beat back in Kansas, but now, in high-octane Las Vegas — which is run by a werewolf mob — she finds herself holding back the very gates of Hell. At least she has a hot new guy and one big bad wolfhound to help…

Starred Review. While the millennium revelation in this fantastic first of a new paranormal series might not be a shocker for urban fantasy fans—i.e., vampires, werewolves, witches and zombies come out of the closet after Y2K—Douglas (Cat in a Red Hot Rage) handles the premise with such spectacular style, it feels fresh. Delilah Street, who was only 11 in 2000, is now 24 and works for WTCH, a Kansas TV station, as a paranormal investigative reporter. When Delilah angers an undead co-worker and is demoted, she moves to Sin City in hopes of finding a possible blood relative seen on CSI Las Vegas V. She gets a job with Hector Nightwine, the show’s producer, and falls in love with Ric Montoya, a former FBI agent who finds corpses by dowsing. Douglas spices the action with fabulous characters: Quicksilver, Delilah’s protective dog; CinSims (Cinema Simulacrums), dead celebrities recreated via science and magic; the oldest living vampire in Vegas, once a famous aviator; and Cocaine (aka Snow), a devilish albino rocker. Readers will eagerly await the sequel.
Copyright © Reed Business Information, a division of Reed Elsevier Inc. All rights reserved. 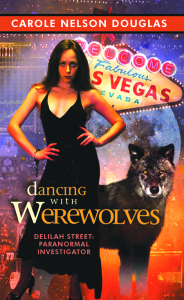 Paranormal Investigator Delilah Street–in her quest to identify the long-buried embracing skeletons she and sexy ex-FBI agent Ricardo Montoya discovered– has to deal with a lecherous vampire, a ghoulish producer, celebrity zombies from classic films, a mysterious albino rock star who bestows addictive kisses on his groupies, and a dead girl in her mirror–and those are just her clients! Post-Millennium Revelation Las Vegas is teeming with supernaturals and run by a werewolf mob, but even the unhumans can’t conceive of what Delilah discovers hidden under its damnable desert sands: unspeakably powerful evil rooted in ancient Egypt… 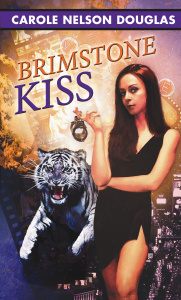 Werewolf mobsters and vampires run Vegas, but that’s yesterday’s news for Delilah Street, paranormal investigator. What’s truly fearsome is her bloody feud with an undead evil empire rooted in ancient Egypt. Now, with her lover Ric fighting for life after a grim battle, the chips are down.  Only an ancient, chained death god can help her.

But Delilah is a born winner who has never let a little danger throw off her game, and she’s been learning fast since she came to Sin City. Her affinity for silver is making mirror-walking a real breeze, and being forced to accept the albino rock star sorcerer Snow’s Brimstone Kiss has ramped up her powers to a startling new level. With the help of her trusty uber-wolfhound Quicksilver, not to mention the orange demon parking valet Manny, Delilah is determined to solve even more paranormal secrets, and hopefully save the few innocents left in town. But can Delilah win her high-stakes gamble for life and love against ancient gods and lethal supernatural odds?

Zombies and Witches and Vamps . . . Oh, My! What happens in Vegas stays in Vegas–at least that’s Delilah Street’s hope. With Sin City’s vampire and werewolf mobs wanting to cash in her chips once and for all, she’s retreating with her partner Ric Montoya and half-wolfhound Quicksilver to her Kansas birthplace. Unfortunately, when it comes to finding trouble, there’s no place like home. . . .
Before long Delilah realizes she’s not in Vegas anymore. Zombie cowboys and spectral cattle drives are kicking up dust, the local weather girls are total witches who forecast perfect storms, and some Hollywood fanatic is raising deadly stars of the silver screen. Speaking of silver, Delilah’s special affinity for the all-purpose monster-repellent leads her and her posse straight down a silver brick road–and into a not-so-fun house of mirrors–putting her face-to-face with the nightmares from her mysterious past and a mystery woman named Lilith, who’s a real dead ringer for Delilah. The key word being dead. 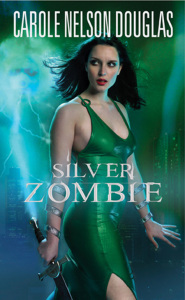 She’s Like a Virgin . . . Simulated for the Very First Time

For a red-blooded male, Las Vegas offers a virtual smorgasbord of temptation: sexy showgirls, vampy vampires, zombie starlets, you name it. But paranormal investigator Delilah Street isn’t worried about losing her man to these vixens. Especially when the one woman with a soft spot for the guy also has a hard-shelled exterior. . . .

She’s a robot—or a CinSim, to be exact—a near-perfect simulation of the silver-metal robot Maria from the classic science fiction movie Metropolis. Part innocent teenage actress, part depraved sex goddess, the new Maria is hooked on Delilah’s partner, Ric, who raised her from the dead. She also happens to be the perfect secret weapon for a demonic drug lord. Which could be one hell of a problem. Delilah’s not the jealous type, but this tin-can temptress must be stopped—even if it forces Delilah to forge a dangerous alliance with her wicked mirror-twin, Lilith. If robo-girl goes ballistic, every player in Vegas loses. . . .