In CAT in a TOPAZ TANGO, Midnight Louie quick steps with a killer on”Dancing With the Celebs”

CAT in an ULTRAMARINE SCHEME 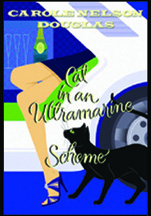 “SOME LONG-RUNNING  mystery series become stale and predictable after 15 or  so installments; Douglas’s 22nd Midnight Louie tale is just as twisty, riveting and intriguing as the ones that came before. Even longtime fans of the  series are bound to say ‘Wow, I never saw that coming!’ to the very end.”–RT BOOK Reviews magazine

International intrigue abroad and the discovery of old and new bodies during the construction of a Mob Museum in Las Vegas put Midnight Louie and his Cat Pack gang on the trail of murderers vintage and contemporary.

The cocktail glass isn’t hiding behind Del’s shoulder for no reason. Of course, there’s a “signature” recipe for a Vampire Sunrise cocktail. How Delilah (and I) became the “Urban Fantasy” bartender has something to do with her series being set in a post-apocalyptic, noir Las Vegas of the very near future, 2013.

The first two novels in the series, Dancing with Werewolves and received starred reviews in Brimstone Kiss, Publishers Weekly trade magazine. There is a Brimstone Kiss recipe with kick, but the signature drink in DWW is not very lupine. It’s called an Albino Vampire.

Each novel begins with a “Meet Me” introduction so new readers can keep up with the action around a Las Vegas Strip run by a werewolf mob and concealing an ancient vampire empire, with hotels named the Inferno and the Gehenna, and parking valet demons who are fans of Old Detroit rides.